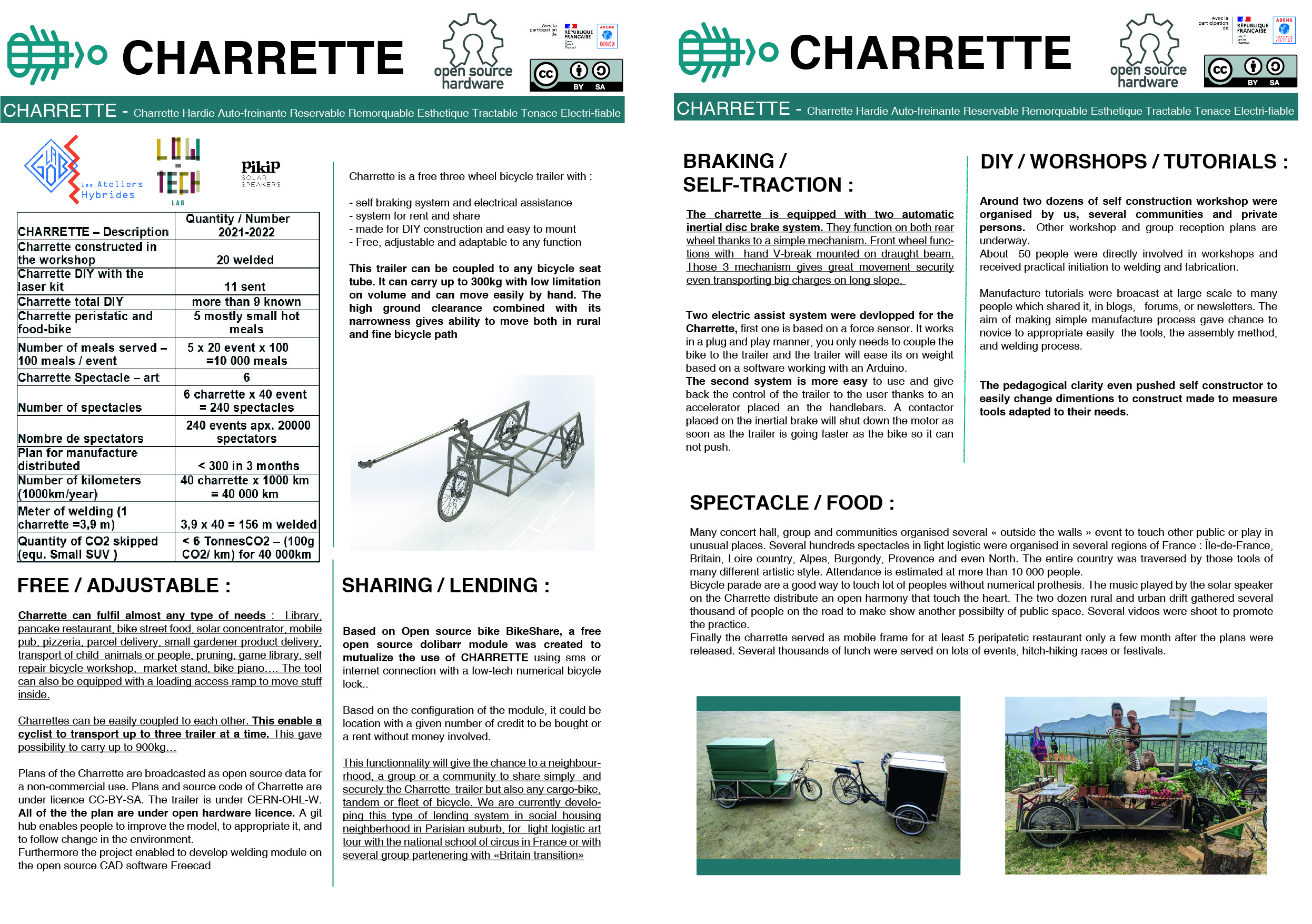 This is a english language small synthesis about a low-tech three wheel bicycle trailer research made during two year In France 2021-2022. Please enjoy this synthesis and share it if you find it intresting. It is an open source Trailer!

Charrette is a free three wheel bicycle trailer with :

– self braking system and electrical assistance
– system for rent and share
– made for DIY construction and easy to mount
– Free, adjustable and adaptable to any function

This trailer can be coupled to any bicycle seattube. It can carry up to 300kg with low limitation on volume and can move easily by hand. The high ground clearance combined with its narrowness gives ability to move both in rural and fine bicycle path

Charrettes can be easily coupled to each other. This enable a cyclist to transport up to three trailer at a time. This gave possibility to carry up to 900kg…

Plans of the Charrette are broadcasted as open source data for a non-commercial use. Plans and source code of Charrette are under licence CC-BY-SA. The trailer is under CERN-OHL-W. All of the the plan are under open hardware licence. A git hub enables people to improve the model, to appropriate it, and to follow change in the environment. Furthermore the project enabled to develop welding module on the open source CAD software Freecad.

Based on Open source bike BikeShare, a free open source dolibarr module was created to mutualize the use of CHARRETTE using sms or internet connection with a low-tech numerical bicycle lock.

Based on the configuration of the module, it could be location with a given number of credit to be bought or a rent without money involved. This functionnality will give the chance to a neighbourrhood, a group or a community to share simply and securely the Charrette trailer but also any cargo-bike, tandem or fleet of bicycle. We are currently developing this type of lending system in social housing neighberhood in Parisian suburb, for light logistic art tour with the national school of circus in France or with several group partenering with «Britain transition»

The charrette is equipped with two automatic inertial disc brake system. They function on both rear wheel thanks to a simple mechanism. Front wheel functions with hand V-break mounted on draught beam. Those 3 mechanism gives great movement security even transporting big charges on long slope.

Two electric assist system were devlopped for the Charrette :

First one is based on a force sensor. It works in a plug and play manner, you only needs to couple the bike to the trailer and the trailer will ease its on weight based on a software working with an Arduino.

The second system is more easy to use and give back the control of the trailer to the user thanks to an accelerator placed an the handlebars. A contactor placed on the inertial brake will shut down the motor as soon as the trailer is going faster as the bike so it can not push.

Around two dozens of self construction workshop were organised by us, several communities and private
persons. Other workshop and group reception plans are underway.

About 50 people were directly involved in workshops and received practical initiation to welding and fabrication. Manufacture tutorials were broacast at large scale to many people which shared it, in blogs, forums, or newsletters. The aim of making simple manufacture process gave chance to novice to appropriate easily the tools, the assembly method, and welding process.

The pedagogical clarity even pushed self constructor to easily change dimentions to construct made to measure tools adapted to their needs.

Many concert hall, group and communities organised several « outside the walls » event to touch other public or play in unusual places. Several hundreds spectacles in light logistic were organised in several regions of France : Île-de-France, Britain, Loire country, Alpes, Burgondy, Provence and even North. The entire country was traversed by those tools of many different artistic style. Attendance is estimated at more than 10 000 people.
Bicycle parade are a good way to touch lot of peoples without numerical prothesis. The music played by the solar speaker on the Charrette distribute an open harmony that touch the heart. The two dozen rural and urban drift gathered several thousand of people on the road to make show another possibilty of public space. Several videos were shoot to promote the practice.

Finally the charrette served as mobile frame for at least 5 peripatetic restaurant only a few month after the plans were released. Several thousands of lunch were served on lots of events, hitch-hiking races or festivals. 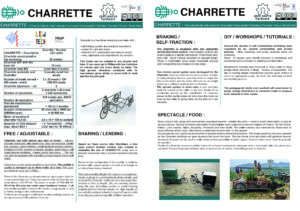